Today’s blog post is a quick announcement that Polytopix is hiring. We currently have four open positions:

Please check out the requirements on the careers page at Polytopix.

Today’s post is about the following paper, a joint work with Qiuyi Zhang, one of my advisees. Qiuyi Zhang is now a graduate student in the Mathematics department of Berkeley.

Undirected graphs of pathwidth at most one are characterized by two forbidden minors i.e., (i)

the complete graph on three vertices and (ii)

the spider graph with three legs of length two each (see the following figure). 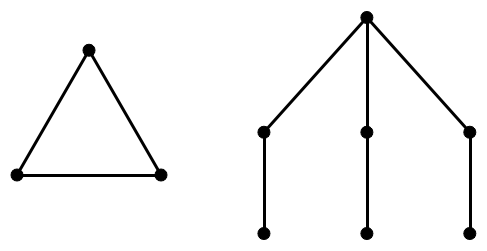 All the forbidden minors we found, looked very cute and we assumed that a proof is nigh. Soon, we realized that the list is  growing quickly and none of our earlier techniques are applicable. After almost an year of patient efforts and roller coaster rides, we proved our finiteness theorem in May 2014, two weeks before Qiuyi Zhang’s thesis defense. It took us 10 more months to get the paper to its current status. So this is a two year long adventure.

I am hoping to prove more theorems in the “directed minors” area in the coming years. The current paper taught me that patience and focus are big factors to make consistent progress. There should be a nice balance between `proving new theorems’ and `writing up the existing results’.

Today’s blog post is a quick announcement of “personalization” feature in Polytopix. We added a new feature that allows users to add their (possibly multiple) twitter accounts in Polytopix. The user’s twitter stream is used to personalize and rank the news articles on Polytopix. More importantly, our semantic similarity algorithms will display contextual explanatory articles along-side the news articles in the user’s feed.